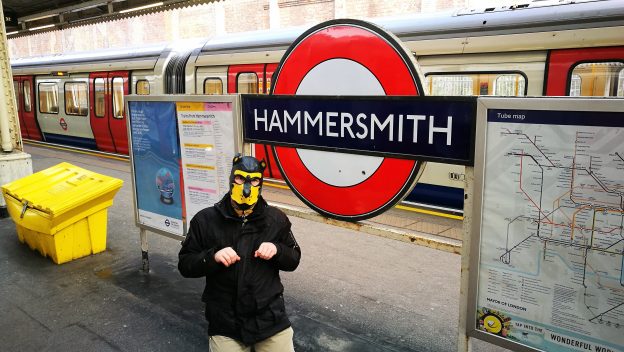 First (proper) stop on the trip around the Circle Line, and it was the end of the branch that broke the circle: Hammersmith. Quite why it was decided to run additional trains down to Hammersmith along the same tracks as the Hammersmith & City Line is anybody’s guess. Probably something to do with capacity or something. More trains = Good! Or something like that. What’s made things even more fun is the station is actually 2 stations separated by a road. The Piccadilly and District Lines are through platforms on one side of the road, whereas the Circle and Hammersmith & City Lines are terminus platforms on the other. Of course, this then started the debate between myself and Echo if we needed to get both stations and tag them separately or just get one photo and post to cover them both. We compromised with having both photos but, since TFL treat the stations as one, I would put them both on one blog post and map marker. I liked this idea most, because less work for me. We had to go through both stations anyway since we were coming from the Piccadilly Line and going to the Circle Line so getting both stations photographed seemed the most sensible. So the post’s photo is the Circle Line one, as this was the mission for the day, whereas the below pic is from the Piccadilly Line platforms.

Update:
On 03/08/2019 Condor and Shades took a trip back to the District/Piccadilly Line platforms to hunt down the 2019 Pride roundel. We found it reasonably easily. There were roundels for Gay Pride (the BAME version), Trans Pride, and Bi Pride but we opted to let other pups track the latter roundels down while we hunted down the rainbow roundels. Hammersmith was the first station we hit. You can see my picture below, with Shades’ in the usual section underneath.

Other pups to visit this station:

One Thought to “Hammersmith (Underground)”

Condor isn’t the only one documenting their station pupping activity.  Other pups are doing it too, with their own blogs.